Why do we need to change our mentality towards making mistakes? Why is the true measure of a referee the way he deals with errors and how can we at RefPal help the refereeing community to change their mindsets?

To start I will take you back to my first ever 8,5 as a referee in UEFA competitions. It happened in a 2012 Europa League qualifier in the Netherlands with a Scottish observer. We managed the game well, got lucky with some decisions, and came away winners. The observer was pleased and during the aftermatch dinner described me as a natural referee with enormous talent. God, it made me proud and my self-confidence skyrocketed. To be fair I got another 8.5 in the spring of 2013, possibly flying on the wave of self-confidence created in Twente. The next one took 5 years and arrived in 2018 - so what happened?

A psychologist Carol Dweck from Stanford University has dedicated her life to researching “where ability comes from” and has written several books on the subject. I recommend reading “Mindset: The New Psychology of Success” (2006) or watching some of her TED talks. In short, her main idea is that our abilities are connected to our belief systems. The belief that ability can be developed through hard work and resilience, motivates us to struggle through difficulties and eventually we will thrive. On the other hand, if we believe that our abilities are natural, born with us, “we are as good as natural ability allows” we will not have the discipline and self-motivation to keep plugging away when things get difficult, hence we stagnate.

Of course, all of us would like to believe that we have a “growth mindset” but the evidence suggests that we need to look at how we react to mistakes to understand our true mindset. As referees we know everything about mistakes, they happen regularly to the best of us. A couple of the truly phenomenal current UEFA Elite referees are known to be amongst the most regular visitors to the OFR screen in their home leagues. However this does not in any way hinder their brilliant performances both at home and in UEFA competitions week-in-week-out.

Carol Dweck conducted several studies with school kids and their reactions to failures in the classroom. The kids with fixed mindsets dread failure as it is evidence that they are not as talented as they thought they are. The reaction most connected to this behavior is avoiding tasks that are hard, avoiding the admittance of mistakes, and going on without trying to solve the issue. Sound familiar to anyone? When we are told by the observer that we have missed a penalty or a red card - is not our first instinct to try to disagree and argue, try to convince the other party of our rightness. Then after a few days go by the video pictures are quite bluntly pointing us towards the uncomfortable thruth. Most of us will accept it, but will we accept the underlying causes for the mistake? Or will we turn to excuses like “It was a hard decision”, “I was unlucky because…”, “My assistant did not help me or confused me, etc…”. 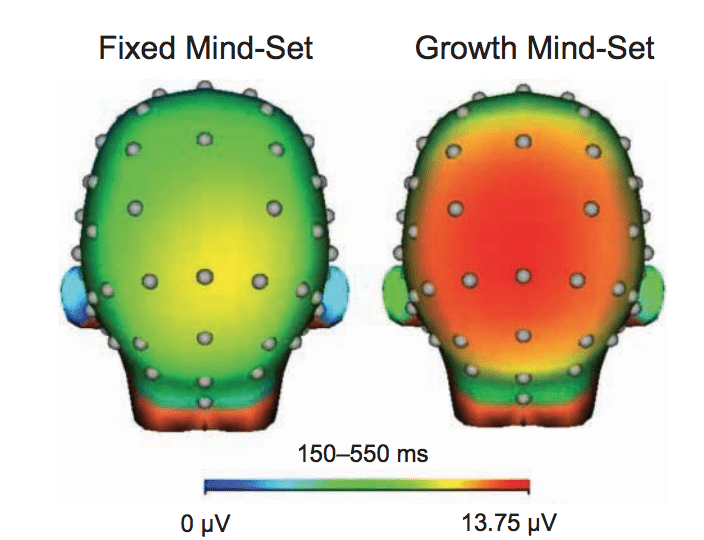 Brain activity comparisson of children when faced with an error from a study by Mangels, Butterfield, Lamb, Good, & Dweck (2006)

According to Dweck people with a growth mindset will see errors, failures as a chance to grow, a chance to learn something new and improve - their brains will light up with activity. While people with a fixed mindset tend to shy away from mistakes and stay passive. Not only does a growth mindset allow you to develop, but you also tend to be less stressed about life and hence be more successful at your tasks as fear is not inhibiting you.

So how do we bring the growth mindset to refereeing? How do we stop referees worrying too much about possible mistakes? A big help has come from VAR - just look at the confidence and game management of referees in the last few years of Champions League as great proof of that. We also need to stop the observation system of 7.9’s but that is a topic for a future blog. The first thing we can do is start collecting data about refereeing and data will open your eyes. In RefPal we have gathered data for every right and wrong penalty decision taken during the 720+ Estonian PremiumLiiga games for the last 4 years and it makes a fascinating read. First and foremost it shows that absolutely every referee is making these mistakes - are you a first-year TOP league referee or a seasoned FIFA official and these mistakes depend on several factors. With the knowledge we can banish the fear and accept the mistakes easier, thus opening a door to development and start to solve the underlying issues that are causing the mistakes in the first place.

How can RefPal help - contact us and we will show you in more detail!

Still did not understand the mindsets? Check out this video

Learn more about the benefits of RefPal, see the system close-up, get deeper input on how & why RefPal works, and how it makes your referees work.
Invite us for demo
ADDRESS Jalgpalli 21, 11312, Tallinn, EstoniaPHONE +372 529 3294, Kristo TohverSAY HELLO info@refpal.orgSUPPORT support@refpal.org
OK To help make this website better and to improve your experience this website uses cookies and other technologies.